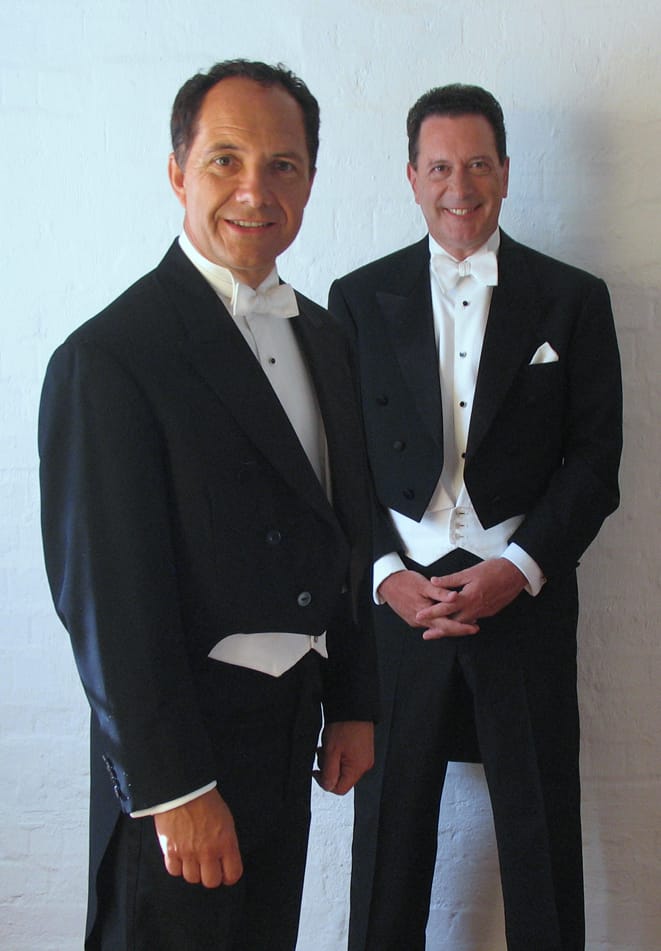 NETTLE & MARKHAM rank amongst the world’s foremost piano duos.  For nearly forty years their vitality, enthusiasm, musical integrity and remarkable ensemble have been delighting audiences throughout the musical world and they are considered one of the most entertaining and musically satisfying partnerships performing today.
David Nettle & Richard Markham’s collaboration proved successful from the start – within four years they had performed on as many continents in a range of concert, festival, radio and TV appearances.  Their unconventional London debut in 1982 at the Wigmore Hall was an “all-Grainger” centenary recital; wide-ranging repertoire and innovative programming have become hallmarks of their work ever since both in the concert hall and recording studio.  They have also performed anniversary tributes to Stravinsky and Saint-Saëns, given the UK and Asian premières of the rediscovered Bruch Double Concerto and were the first duo to give performances of Holst’s own two-piano version of The Planets in modern times; their subsequent recording of this ‘tour de force’ won a British MRA Award for Excellence.  An eclectic range of compositions for one piano/four hands and two pianos has been written for them over the years, as well as a new two-piano concerto commissioned for their 30th anniversary.  In addition they regularly champion less familiar or neglected compositions.  Three television documentaries have been made about their work.

Nettle & Markham perform in the main concert halls of Europe (Royal Festival Hall, Queen Elizabeth Hall, Royal Albert Hall and Barbican in London, Dvorak Hall in Prague, Philharmonie in Berlin, Singer-Polignac Foundation in Paris and Concertgebouw in Amsterdam) and with major British orchestras such as the London Philharmonic, the RPO, the CBSO and the ECO as well as other international orchestras.  They also participate in major international festivals such as the Bath, Harrogate, Berlin, Schleswig-Holstein and BBC Proms.

Their New York debut in 1990 marked the beginning of an extensive relationship with North American audiences where they are immensely popular, undertaking major tours most seasons accompanied by two matching Steinway concert grand pianos.  In 2002 they celebrated both their 25th anniversary and ten years of US travel with a recital in New York’s Steinway Hall.  Their US tours have now taken them over 75,000 miles, performing in more than 30 States to over 160,000 concert-goers.

In addition to appearances at traditional music venues throughout Europe, North America, Australia, South Africa, Japan and SE Asia, it has been their special pleasure to introduce audiences to four-handed performances, sometimes for the first time, in Sri Lanka, Korea, the Philippines, Malaysia, Brunei, Syria, Jordan, United Arab Emirates, Kuwait, Iraq, Kenya, Zimbabwe, Botswana and Lesotho.  They have been guest performers on Cunard and P&O cruise liners.

Nettle & Markham’s varied recital and concerto repertoire encompasses not only standard works but also their own distinctive transcriptions.  Their highly praised recordings reflect the range of styles they are known to be able effortlessly to assimilate, from Stravinsky’s The Rite of Spring and Petrushka and Brahms’ Complete Two-piano Works to Sir Malcolm Arnold’s Concertos for Two Pianos & Piano Duet and Youmans’ Carioca (South of the Border with Jill Gomez).  Their recital CD series Nettle & Markham in England/America/France showcases their two-piano virtuosity as both performers and arrangers. Nettle & Markham in America features their large-scale transcription Scenes from West Side Story.

Nettle & Markham are Steinway Artists.  They also own and occasionally perform on a very rare, magnificent full-size Pleyel Double Piano of 1928 (recently restored by Andrew Giller) which, along with their own Steinway pianos, is housed in their unusual studio –  a converted Victorian railway arch which has been featured in a BBC “Modern Times” documentary and in the “Guardian” magazine.

Most of the CDs mentioned above are available at this evening’s performance.