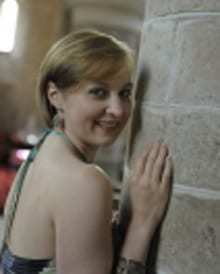 Katie Bray (contralto) was born in Devon in 1987 and completed a music degree at the University of Manchester in 2008. She now studies on the opera course at the Royal Academy of Music.

Katie was awarded the 2009 Major van Someren-Godfrey Prize for English Song, the 2010 Elena Gerhardt Lieder Prize, the Alfred Alexander Scholarship and the Karaviotis and Sir Thomas Armstrong Awards. She was also the recipient of the Audience Prize in the 2010 Handel Singing Competition.

Recent solo appearances include Dorabella in R.A.O’s production of ‘Cosi fan tutte’ and the alto solo role in Handel’s ‘Messiah’ in the Wratislavia Cantans Festival.

Forthcoming concerts include a Gershwin recital with Tom Poster and a lunchtime recital in the Handel Festival at St George’s, Hanover Square. Katie will also be performing the role of Wu in the world première of Peter Maxwell-Davies’ new opera, ‘Kommilitonen!’ at the Royal Academy in March 2011.