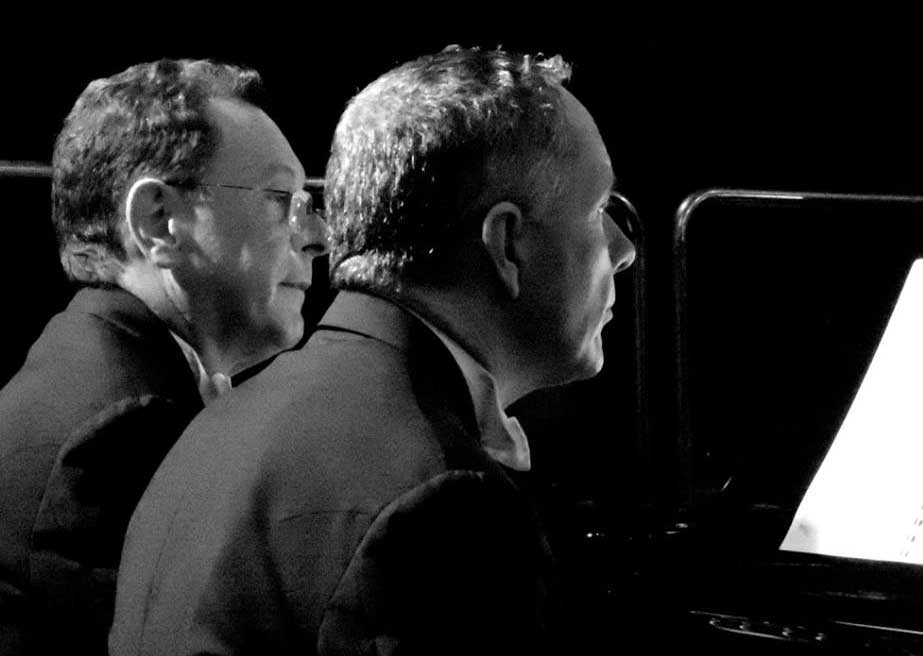 On 29 March 2015, Palm Sunday, Louth Choral Society conducted by Martin Pickering gave a choral concert of works by Brahms and Poulenc.  They were joined by pianists David Nettle and Richard Markham who also contributed works for piano duet by Saint-Saens, and by baritone Gareth Brynmor John and soprano Elizabeth Adams.

The principal piece was Brahms’ A German Requiem.  Composed during the 1860s it is a popular work with both performers and audiences alike.  In this concert we heard Brahms’ own arrangement for soloists, choir and piano duet, performed in English.

The work places great demands upon the choir, consisting as it does of seven substantial movements and requiring great stamina.  This was a well shaped account, ebbing and flowing in intensity, and combining atmospheric word-painting with real power in places.  The contrasts achieved in the second movement between the funereal menace of its opening section and the joy of the following one were excellent, and there was thrilling singing in the sixth movement at “Death is swallowed up in victory”.  The well known “How lovely are thy dwellings fair” was beautifully realised, and the production of the long, soaring phrases, in the final movement, passed from voice to voice, was serenely accomplished – evidence indeed that the choir had left behind occasional intonation issues and passed the stamina test.  The overall effect was very powerful.

The technique and musicianship of Gareth Brynmor John contributed considerably to the sense of drama of the Requiem.  He was able to move from darkness to hope apparently effortlessly, revealing many different colours in his voice.  The choir complemented him well, as it did Elizabeth Adams in her sustained, contemplative delivery.

Well known and justifiably well liked piano duettists Nettle and Markham also provided a wonderful range of colours in their accompaniments, perfectly setting the atmosphere at the start, and grading long crescendos and diminuendos with enormous skill.  The composer’s piano arrangement works very well, even if at times a heavier bass would perhaps have anchored the structure more effectively in the St James’ acoustic.  The Saint-Saens pieces lightened the mood before the interval, being part of some first-class programme planning.  The playing was characterised by a delicacy of touch, an excellent balance between the voices on the piano, a beautiful shaping of melody, and a flamboyant sense of performance.

The concert began with Four Motets for a time of Penitence by Poulenc, composed in 1938, pieces most appropriate for the Holy Week.  They require huge dynamic contrasts and a real edge in performance in order to communicate their devotional power.  The choir rose to the challenge most of the time, communicating the sense of the works with great fervour.  Especially memorable was Lisa Statham’s soprano solo at the start of the fourth motet.

This was another fine concert under Martin Pickering’s capable direction.  How splendid to be able to hear such an ambitious, well constructed programme so ably executed!