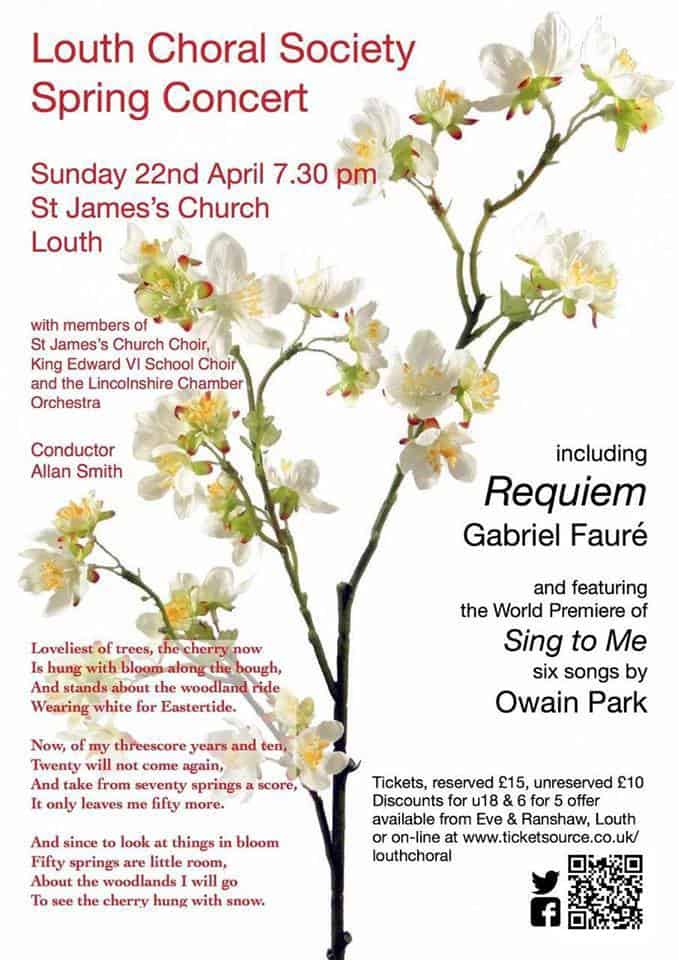 An inspiring programme of French and English music was performed by Louth Choral Society in their Spring Concert.  The choir was augmented in some pieces by members of the King Edward VI School Choir and the St James’s Church Choir.  The Lincolnshire Chamber Orchestra, organist Darren Williams and pianist David Parker provided professional, expressive accompaniments.

A sensitive performance by the choir of Fauré’s Cantique de Jean Racine opened the concert, setting the tone for a memorable evening.

This was followed by soprano Dilly Leak, a Senior Girl Chorister at St James’s Church, who sang Massenet’s Ave Maria – a vocal arrangement of the composer’s celebrated Méditation from his opera Thaïs.  Dilly’s beautifully clear upper register suited this perfectly.

The choir’s performance of Bizet’s Agnus Dei – the choir conductor, Allan Smith’s arrangement for voices of the Intermezzo from L’Arlesienne Suite No 2 – was a refreshing re-take on a familiar classic.  The use of children’s voices here was particularly touching.

Baritone Nic Beemster’s performance in Howells’ By The Waters of Babylon was very powerful in its interpretation, with perfect balance between voice and the organ, violin and cello accompaniment.

The high spot of my evening followed with the first performance of Sing to Me by Owain Park – a suite of six songs with two piano interludes.  It was composed following a bequest made by Gill Fraser, formerly an alto in the choir, and is a setting of words by different poets reflecting Gill’s love of music, nature and her joy for life.  The composer conducted the choir which was accompanied with great skill and expression on the piano by David Parker.

It was in this work that we heard the choir at its magnificent best!  We heard the full range of emotions in a performance that was touching, thrilling and thought-provoking.  Owain Park’s music achieves that elusive quality of being both challenging and accessible.  The memory of the choir’s performance of this work, which should become a classic of its time, will long stay with me.

The second half of the concert was a performance of Fauré’s Requiem, sung in the French Latin that Fauré would have known.  This was a performance, which was so appropriate to the setting of St James’s Church, using the composer’s original 1893 orchestration.  It is a work which demands sensitivity, yet it has moments of great drama – qualities amply demonstrated by the choir.  Treble James Shaw-West’s Pie Jesu had a touching simplicity and purity, while Nic Beemster’s Libera me had great power and authority.

This was a perfect programme for a spring evening, made all the more special by that wonderful first performance of Owain Park’s Sing to Me.