In contrast to their excellent spring concert ‘Song of Songs’, with its many soloists, this concert featured mainly the choir and showed off the depth of talent in it.  The programme covered extracts from six operas with explanation between each piece provided by Martin Pickering, Musical Director, who also provided accomplished solos showing off his beautiful voice and stagecraft. 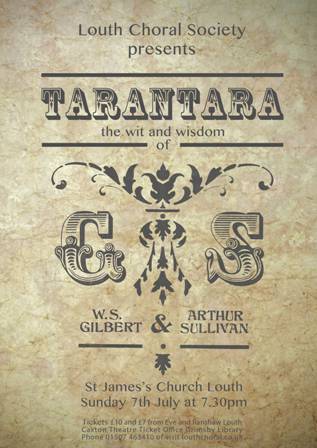 The choir were in good voice with clear diction and secure rhythmic passages required by many of the choruses and produced a particularly beautiful full chorus in Hail Poetry.  All sections excelled and clearly enjoyed the music.

The programme provided an opportunity for soloists from the choir to feature on their own or in larger groupings.  In addition, John Barrow and Kate Witney joined the choir soloists and together with Gill Parker, Vocal Coach, covered all the various characters in the selected choruses.  I particularly enjoyed the duet, ‘O raptures, when alone together’ from The Gondoliers, featuring John and Gill, and Kate as the Queen in the Exit of Fairies chorus ‘Tripping hither, tripping thither’ from Iolanthe.  All the choir soloists were very effective.

Piano accompaniment was provided by Tony Pinel, Assistant Musical Director, and David Parker, working individually and as four hands to provide a most effective orchestral-style backing.

Louth Choral Society have an exceptional chorus line and it was good to hear them performing a light operatic programme and clearly enjoying it.  But their forte and the highlight of the concert for me was Sullivan’s ‘The long day closes’ to end the evening with superb unaccompanied singing.  2013 is truly a year of innovative programmes for the choir with the next concert entitled ‘Winter Words’ marking the centenary of the birth of Benjamin Britten and the 50th anniversary of the assassination of John F Kennedy.  A concert not to be missed so be sure to mark 7:30pm Sunday 24th November, at St James’s, Louth in your diary.