Leigh Woolf studied singing as both undergraduate and postgraduate at the Royal College of Music, London. As a student she was widely acclaimed, winning many prizes in German Song, English Song and interpretations of Bach and Handel before graduating with a prestigious first class diploma in both recital and opera. She currently studies voice with Paul Farrington and is a Samling Foundation Scholar. 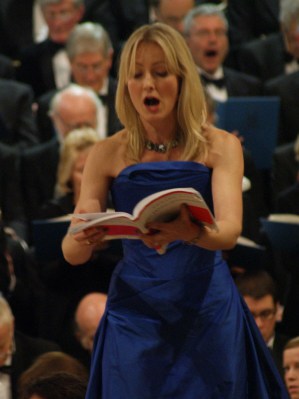 A renowned concert singer, she has sung much of the major oratorio repertoire from Purcell to Britten, performing worldwide with such notable conductors as Sir David Willcocks, Sir John Eliot Gardiner and Thomas Zehetmair, and gave a long remembered performance of Bach’s St Matthew Passion both singing alongside and conducted by the legendary Peter Schreier. Many of these concerts have been broadcast by the BBC and other national media. She is also regarded as a leading interpreter of the works of Elgar, particularly The Kingdom, The Musicmakers and The Dream of Gerontius.

A great lover of song repertoire, recent recital performances have included Schumann’s Frauenliebe und Leben and Brahms’ Liebeslieder at London’s Wigmore Hall, Gala Concerts for the Samling Foundation alongside Sir Thomas Allen to raise money to further the study of music and fine art, duet concerts with Christopher Maltman, appearances in the song recital series at St John’s Smith Square, London, The Mozarteum, Salzburg and recitals throughout the UK and Europe accompanied by Malcolm Martineau.