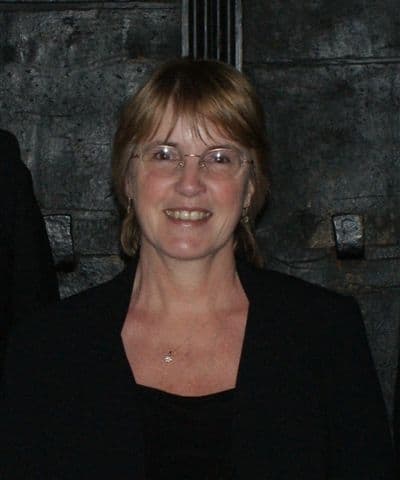 GILL PARKER moved to Grimsby from London at the start of her teaching career having met and married local musician, David Parker.

She graduated from St Anne’s College Oxford where she took an active part in music making both as a singer and a viola player. She was a founder member of the Tallis Scholars under the directorship of Peter Philips, recorded and broadcast with Schola Cantorum of Oxford and was a member of the Oxford and Cambridge Chamber Choir at the festival in Saintes, France. With Emma Kirkby, she performed at the Edinburgh Festival and sang at both the Cheltenham and Bath Festivals directed by Nicholas Cleobury.

Since moving to Grimsby, choral and solo work has taken Gill abroad to both Europe and  Moscow. She has continued performing as a soloist giving performances in concert halls and cathedrals throughout the country.

In particular, Gill enjoys the challenge of teaching people of all ages and abilities to sing and has been rewarded by seeing several of her students making solo careers as a result.  She now works regularly with small groups of singers in the Choral Society on vocal production and singing technique.