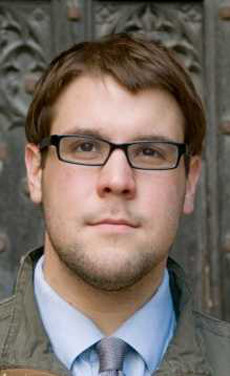 Božidar Smiljanic  (b.1989) is a British-born Serbian Bass-Baritone who grew up in Wembley, Middlesex. He read Law at the University of Nottingham, graduating in 2010, and is currently a choral scholar at Lincoln Cathedral. Whilst studying law, Božidar led an active musical life, performing as a soloist and in numerous vocal ensembles through to principal roles in full-scale productions such as Gilbert & Sullivan’s The Mikado and HMS Pinafore. He also engaged in regular singing in the Anglican choral tradition at the church of St Mary the Virgin, Nottingham.

Upon graduating in 2010, Božidar embarked on a choral scholarship at Lincoln Cathedral and has since sung the regular daily services and performed in numerous concerts, broadcasts and recordings, both as a member of the choir and as a soloist. Past performances include singing the role of Pilate in (and an aria from) Bach’s St John Passion in both Lincoln and Nottingham, Handel’s Dixit Dominus and a wide selection of bass solos in the context of cathedral services (masses morning/evening canticles and anthems.)

Outside of the cathedral, Božidar partakes in a variety of musical engagements as both a soloist and ensemble singer. Past performances include Rossini’s Petit Messe Solenelle, a Bach and Schütz-themed concert with the Nottingham Baroque Soloists, Purcell’s Come Ye Sons of Art with the Lincoln Baroque Chamber Ensemble and Bach’s Magnificat with the Lincoln Chorale. As a member of The Lincs Effect, an all-male a cappella vocal ensemble, Božidar has enjoyed performing a diverse musical repertoire, from Byrd to the Beatles in and around Lincolnshire.

In January and February 2012, Božidar made his song cycle debut with performances of Winterreise in both Lincoln (with Charles Harrison) and Nottingham (with John Keys). Since then, he has performed several solo recitals and concerts, including at ‘The People’s Festival’ in Grimsby.  In June 2012, Bozidar made his London debut with a performance of Winterreise in The Grosvenor Chapel, Mayfair.

Božidar has been awarded a full scholarship to the Royal Academy of Music to study for an MA in Vocal Studies, starting in September 2012. He is also very grateful for the support that he will receive from the Countess of Munster Musical Trust.